I think one of the features I like most about this house is the tiny room on the second floor.  It features a 4 x 4 room with four doors connecting each room. The vampires wanted it constructed in this way so they wouldn’t have any problems trapping someone in the house. Evil I know, but I’m just the architect, so don’t look at me! Anyways, apparently this room with all the doors creates a way for them to corner a person. When a sim lands in this room they have only three other doors to pick and every door goes to rooms with no exit.  They wanted as few doors as possible.  They said, “Simma make it a maze,” and I did as I was told. You really shouldn’t argue with vampire clients.

I told them about “Starlight Manor” since it was up on the market for a cool 23 million, but they refused to even go visit stating that it was “too big and had too many windows”. I thought having a house that lets in the light was a plus in architectural design, but I guess not! Also, the husband mentioned his wife is having her 1000 year birthday this year and the long winding stairs would be hell on her back—literally. Get it? Hell? (Yeah, I know, me and my corny jokes.)

I just kept thinking most guys complain when their wives get past 50, but imagine having one that is a thousand-years-old! She did look pretty good for her age. Blood keeps her looking no older than 300! You trying looking that good without cryogenics! Is that even a thing?

They did have an interesting love story though. He said she tricked him into separating from his friends when he went out drinking one night at a bar.  She bit his neck in the back alley, then chanted some incantation and the rest was history.  They have been together almost 200 years now! Talk about #relationshipgoals, am I right? Personally though, I made a mental note to never go to back alleys with strangers. The whole undead, pale thing is really not my thing.

As a Sim architect, I deal with a lot of clients, and let me tell you, these were some truly odd folks. I was just happy to have finished the design before they tried to suck my blood. I kept having nightmares about a red piano and a bathtub that only spews out red water...strange, I know.

Needless to say, when I got my last check, I was out of there. Except, well, I met a serial killer and he wanted a dungeon. That’s going to have to wait for another post.

Small walkthrough video coming soon. In fact, always expect one with every property I post. Remember to subscribe if you want to stay updated, and let me know in the comments what you think you would do differently in this design. Keep in mind, these are vampires!

As always, thank you so much for visiting and letting me share my crazy builds with you. 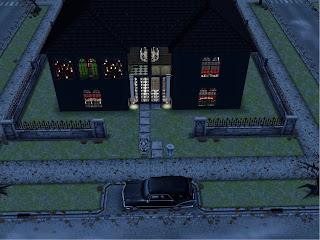 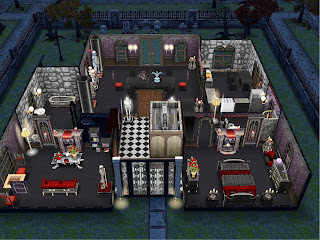 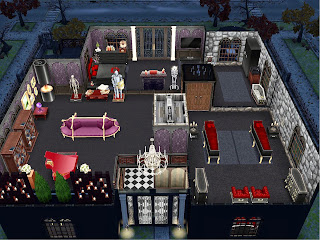 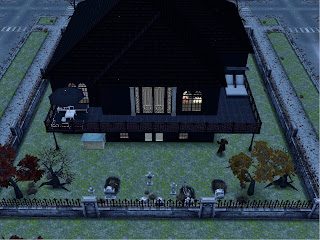